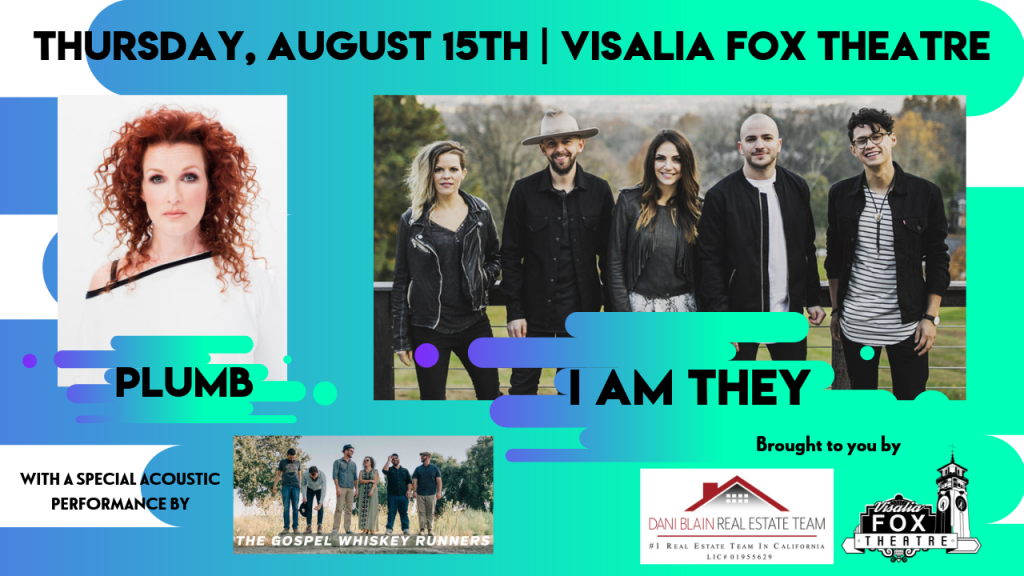 PLUMB – Throughout her decade-plus career as a songwriter, recording artist, and author, PLUMB has found success in a myriad of genres, selling over half a million albums and millions of singles sold and streamed worldwide. Her music has been a favorite with music supervisors, having her songs included in dozens of ad campaigns, movies, and TV placements. Her career achieved an incredible milestone with her prophetic, bestselling 2012 album NEED YOU NOW and corresponding Need You Now: A Story of Hope memoir that chronicled the miraculous restoration of her marriage. These projects were followed by the 2015 breakout album Exhale and her 2017 God Help Me EP.

I AM THEY made its national debut in January 2015 with their self-titled album on Essential Records. The band’s five-piece, pop-acoustic-worship sound is anchored by three-part vocal harmonies. The group, made up of Abbie Parker (vocals/harmonium), Jon McConnell (vocals/guitar/keys), Matt Hein (vocals/guitar/mandolin), Justin Shinn (keys/banjo) and Sara Palmer (drums) represent I AM THEY – inspired by John 17. “In that chapter,” shares Sara Palmer, “Jesus is praying for his disciples and refers to them as ‘they.’ He’s praying and saying things like, ‘Sanctify them. Make them holy. They are not of the world because I am not of the world.’ He’s really interceding for his disciples. We are disciples of Christ and being disciples is just as important today as it was back then. We’re still here for the same purpose on the same mission with the same calling, bringing people to the Lord and spreading the news of the Gospel to people. We really wanted to incorporate that into our mission as a band, saying that anybody who is a believer in Christ is a ‘They.’ They are a disciple as well so we can stand together in that and really bring people into the ‘I AM THEY’ family because we are all family in Christ.”

The Gospel Whiskey Runners – “Know Your Enemy” is the long-awaited follow-up to GWR’s 2011 debut release, Hold On. The California-quintet has been very fortunate as their music has landed on some of television’s best shows such as American Idol, Criminal Minds and more! Hold On’s success found digital success as well with over 11 million spins coming from Pandora alone.